Drinking Two Glasses of Water Each Morning May Change Your Life

First of all, I want to start by saying that I am in no shape or form a morning person. However, I must wake up early in the morning. Even though I know it’s not healthy, I usually snooze in bed until the very last moment, get dressed, grab a bagel on my way to work, and drink a cup of green tea when I get there. Or an hour or so after I get there. It depends on the day.

Usually, I drink my first glass of water around noon. Sometimes even later than that. When I work, I get invested in what I do so it’s not uncommon for me to forget to drink water for hours on end. During an average day, I drink about one cup of tea and two glasses of water during work hours. And usually, I remember to drink water when I start feeling parched, which is not exactly healthy. 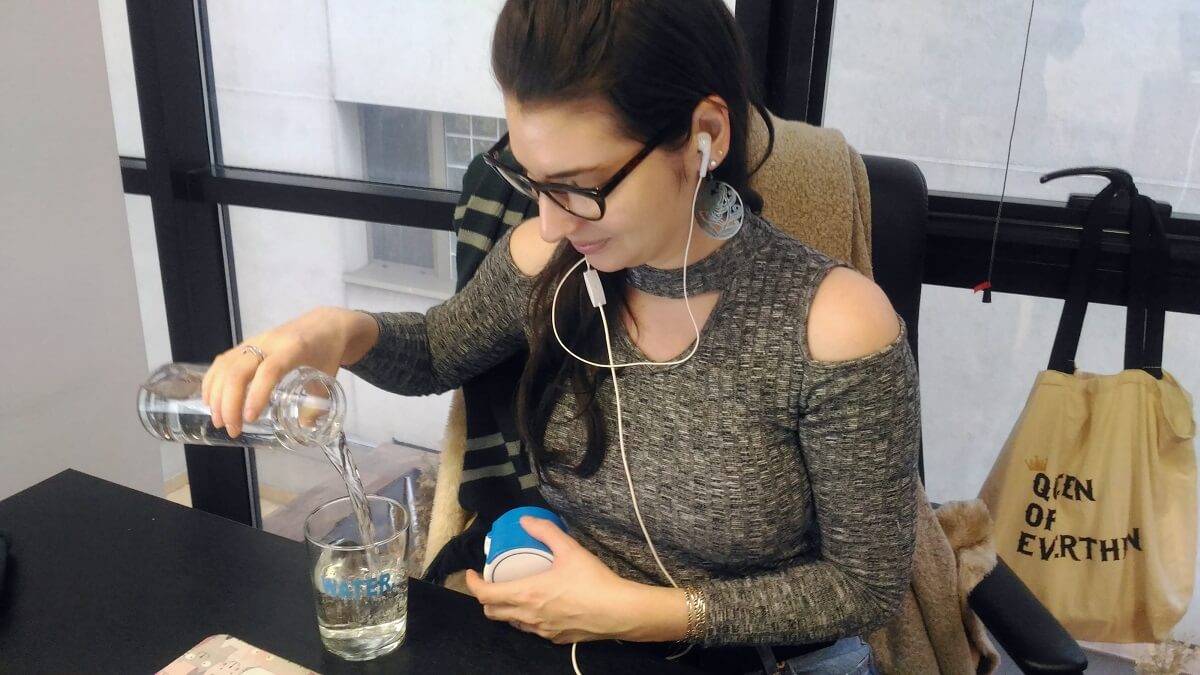 How much water I drink now

Learn More about the Signs that You’re Not Drinking Enough Water!

Of course, there’s my morning cup of green tea and my occasional cup of black tea, but those don’t add up to the desired total. 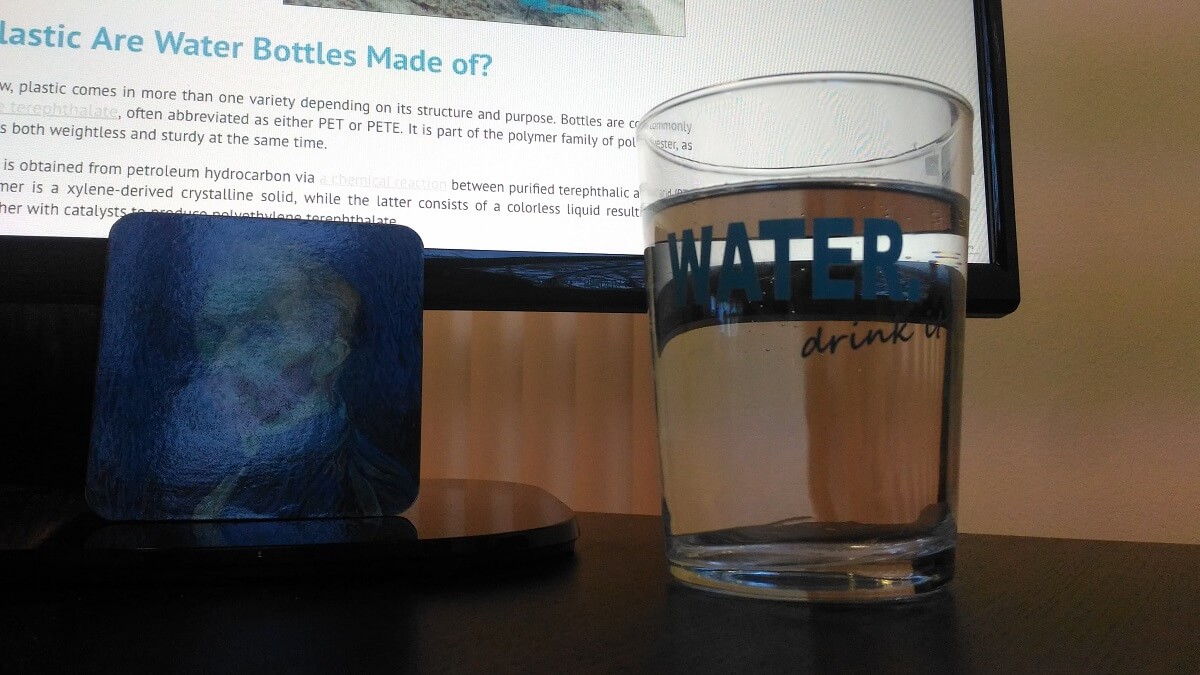 I keep my glass of water close by, but I often get caught up with work and forget to drink it.

How much water I want to drink

I want to drink the recommended 68oz (2 liters) per day, maybe even 85oz (2.5 liters) when I don’t eat fruits and after I quit my soda habits.

How I plan to increase my daily water intake: 2 Glasses of Water Each Morning

After researching for the best methods to drink more water, Corina and I decided to put some of those methods to the test. We both wanted to increase our daily water intake so why not experiment a little?

Since I’m a diehard multitasker, I could not conduct just one experiment at a time, so, after doing my homework, I decided upon the following three:

I chose those three in particular because they worked together perfectly, it felt like a natural state of experiment symbiosis:

On paper, it all sounded awesome, but I never expected the hardships I encountered. Ok, I may have exaggerated a bit for dramatic effect, but in all fairness, it was more difficult than I first imagined.

Here’s the gist of it.

The Premise of Drinking Two Glasses of Water Each Morning

An old Japanese ritual, it is said that drinking approximately 16oz (500 ml) of water on an empty stomach can help improve your overall health. The many benefits of adopting this morning habit include improved metabolism, a stronger immune system, a healthier stomach, a more regular bowel movement, and better skin.

It sounds a little too good to be true for such a simple thing to do. Then again, almost everybody is aware of the health benefits of drinking water, and yet during summer, 75% of Americans suffer from chronic dehydration.

Day 1 of Drinking Two Glasses of Water in the Morning

As usual, I woke up later than I planned, so I was in a bit of a hurry. I jumped out of bed, went straight to the kitchen, looked for the glass that I prepped the night before (when I say that I’m in a hurry in the morning, I mean it) and poured some water in it. It’s an 8oz (250 ml) glass, so I had to fill it twice.

I drank the first glass in a single gulp because I felt parched. The second one, though, didn’t quite go down as smoothly.

So I took a breather and went into the living room. Gripping my glass tightly, I was already thinking about what to wear, calculating how much time I have left to brush my teeth and rush out the door when, while trying to finish my morning water ratio. However, I stopped for a second. It may sound like a cliché, but for the first time in a long time, I looked out the window, and I took in the view. That’s the first benefit of drinking water on an empty stomach: the serenity of it all. 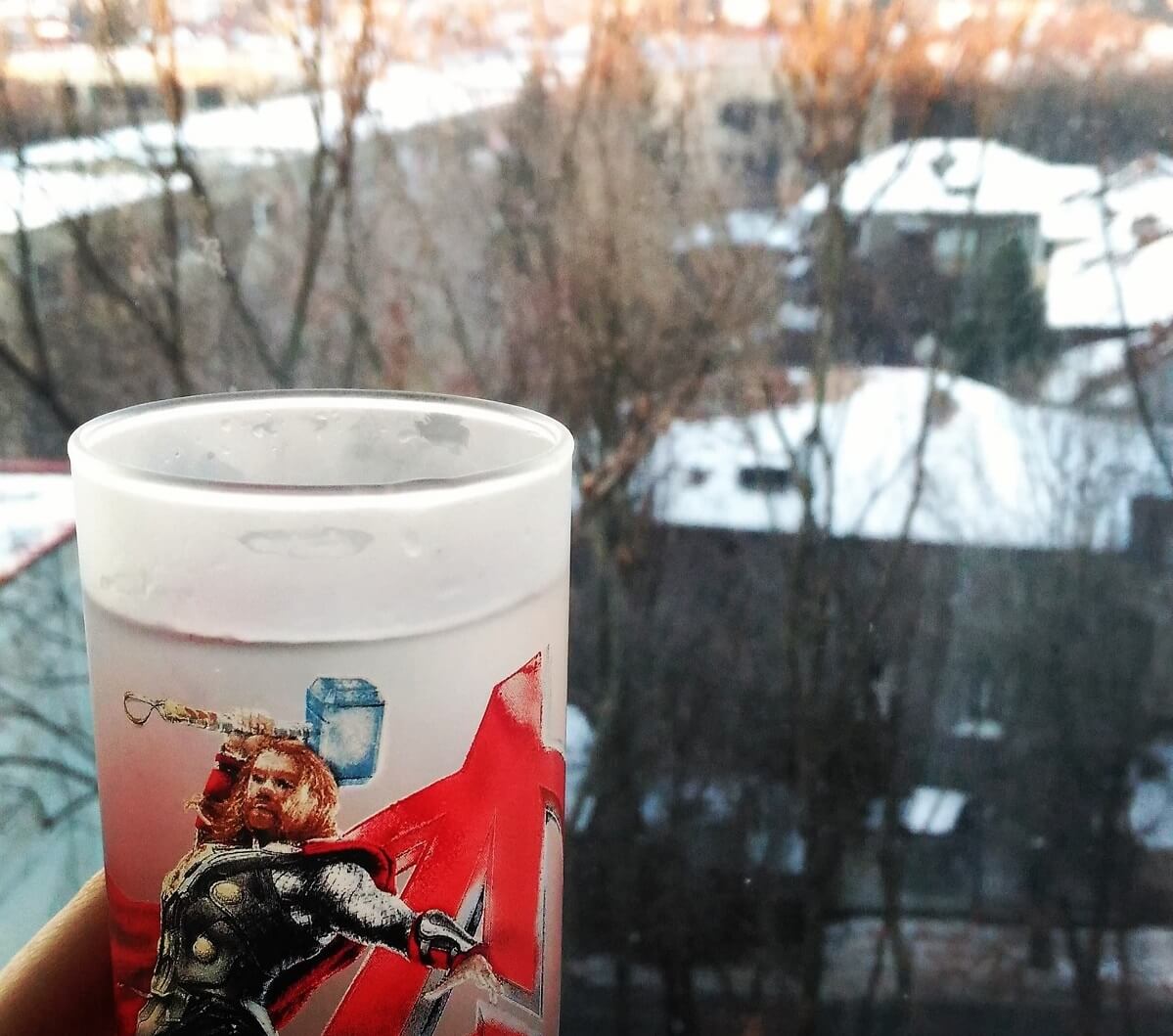 Day 2 of Drinking Two Glasses of Water in the Morning

Nothing changed after the first day, except for the fact that I drank my morning glasses of water in front of the window, again.

I felt like those two minutes of serenity helped me start the day in a better mood, both physically and mentally. However, it could have also been the fact that it was a Saturday and I woke up after the sun was already high.

Day 3 of Drinking Two Glasses of Water in the Morning

This is when I started feeling a change. I woke up and I instantly reached for the water, didn’t even struggle with the second glass. I did feel like I had more energy during the day, but I waited for trial by Monday to see if it was indeed the water or the weekend vibe. 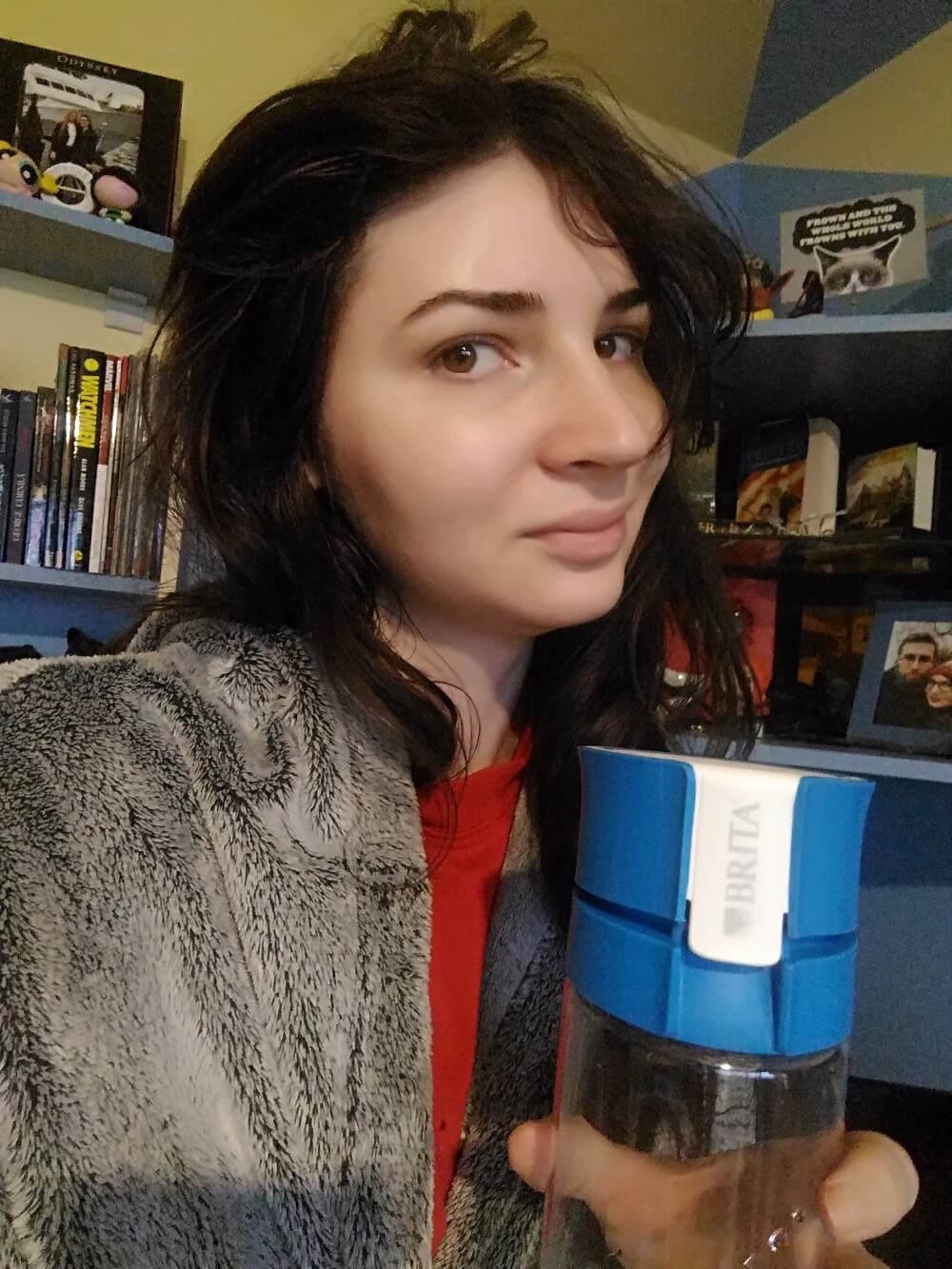 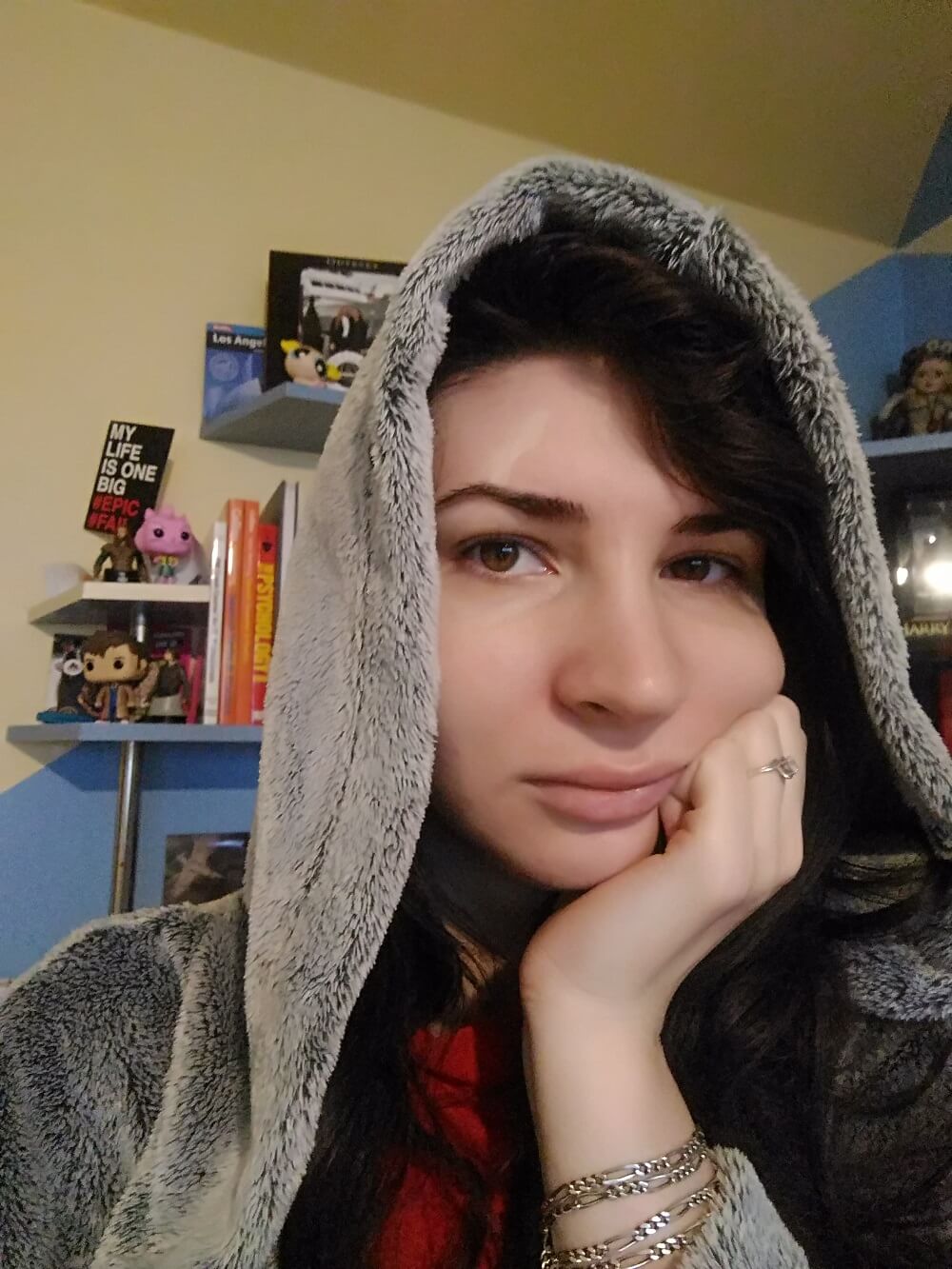 Day 4 of Drinking Two Glasses of Water in the Morning

Ah, Monday, my old nemesis. When the alarm went off, I still struggled to wake up – I firmly believe that no amount of water will ever help me wake up in the morning on my own accord. However, something was amiss. I again felt parched and went straight for the kitchen to get my morning dose of water.

Fast forward a couple of hours and I was still in a good mood, had a lot of energy, and I was just completing my tasks, feeling like I finally managed to include water in my daily routine.

Nevertheless, I must also note a major inconvenience. While I don’t want to blame my inherent tardiness on my new healthy morning routine, I did find that I need an extra 3 to 5 minutes to get ready to leave because water going in must also come out.

So if any of you want to start this experiment, do keep in mind that it will take up about 10 minutes from your morning routine.

Day 5 of Drinking Two Glasses of Water in the Morning

I can safely say I’m going to drink my two glasses of water on an empty stomach for the rest of my life.

My body was already craving it.

However, I still couldn’t get accustomed to drinking carbonated water instead of soda.

I never imagined how much I could crave Coke. I know it’s bad for me, I know I’m better off not drinking it, but man, fries without Coke is like … well… fries without Coke. Nevertheless, the experiment must go on and I try to console my taste buds with fizzy water. It’s the same… but different.

Nothing new happened as I immersed myself in the regularity of drinking 16oz of water as soon as I woke up. The energy spikes transformed into a constant, my skin started to feel softer, and my metabolism seemed to get a kick out of my now stable morning routine.

Overall morning visits to the toilet increased by a factor of two, the need to drink more water also became a constant, and I can safely say that I credit the significant increase in my energy levels to the fact that my body is finally hydrated.

For me, water is the new coffee!

I’m the queen of the world!

All jokes aside, I must say, this is a habit I will not kick. So I can’t say that this is the last day of the experiment, but just another normal day.

The Bottom Line of Drinking 2 Glasses of Water Each Morning

I wholeheartedly recommend you to try this at home. As for this habit, it seems to be the secret to a slinky physique with little effort. I will come back with proof after a couple of months. 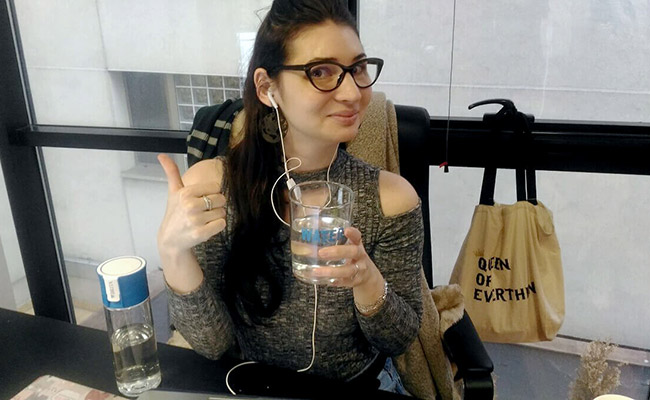 PS: I’m still trying to live a healthy lifestyle and give up soda, but I must admit that I do indulge with an occasional Coke. After all, I’m only human. 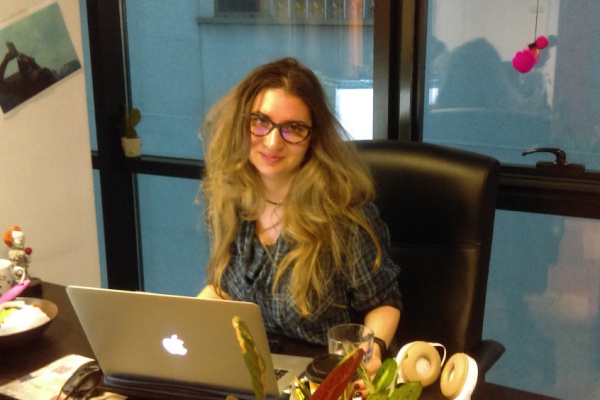 I don’t know how time flew these past months. But, as I promised, I came back here to tell you how my routine of drinking those two glasses of water each morning went. I admit, I skipped a couple of days in the past four months, but I made it my goal to keep up with the program. So, without further ado, here are the results I am proud of sharing:

After months of drinking two glasses of water each day, I can safely say that such a simple and healthy practice can change your life. It may be hard at the beginning, but once you ease into this routine, you will feel better, healthier, younger even. I still fully recommend you try. If you did already, tell me how you felt! Do you perceive the changes as significantly as I do?